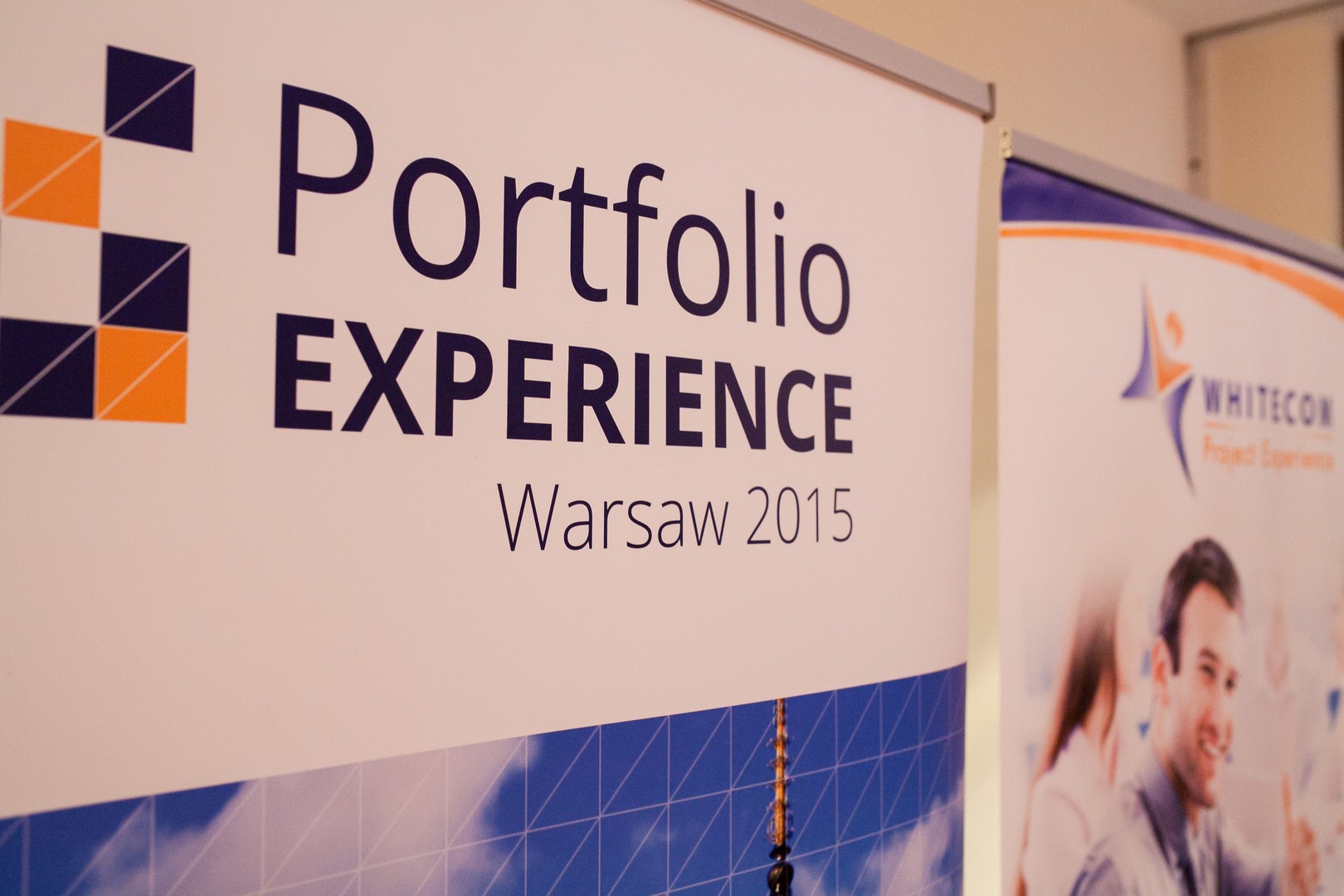 The next edition of Portfolio Experience Conference reached completion. The event took place 23-24 April 2015 in Warsaw Marriott Hotel, where were gathered almost hundred attendees interested in Project Portfolio Management and PMO. Practitioners and experts from all around the world discussed topics from the main theme of the Conference “PMO Transformation to Meet the Business Expectations”. This year, it was the first time when Portfolio Experience was two-day event including conference and workshop. 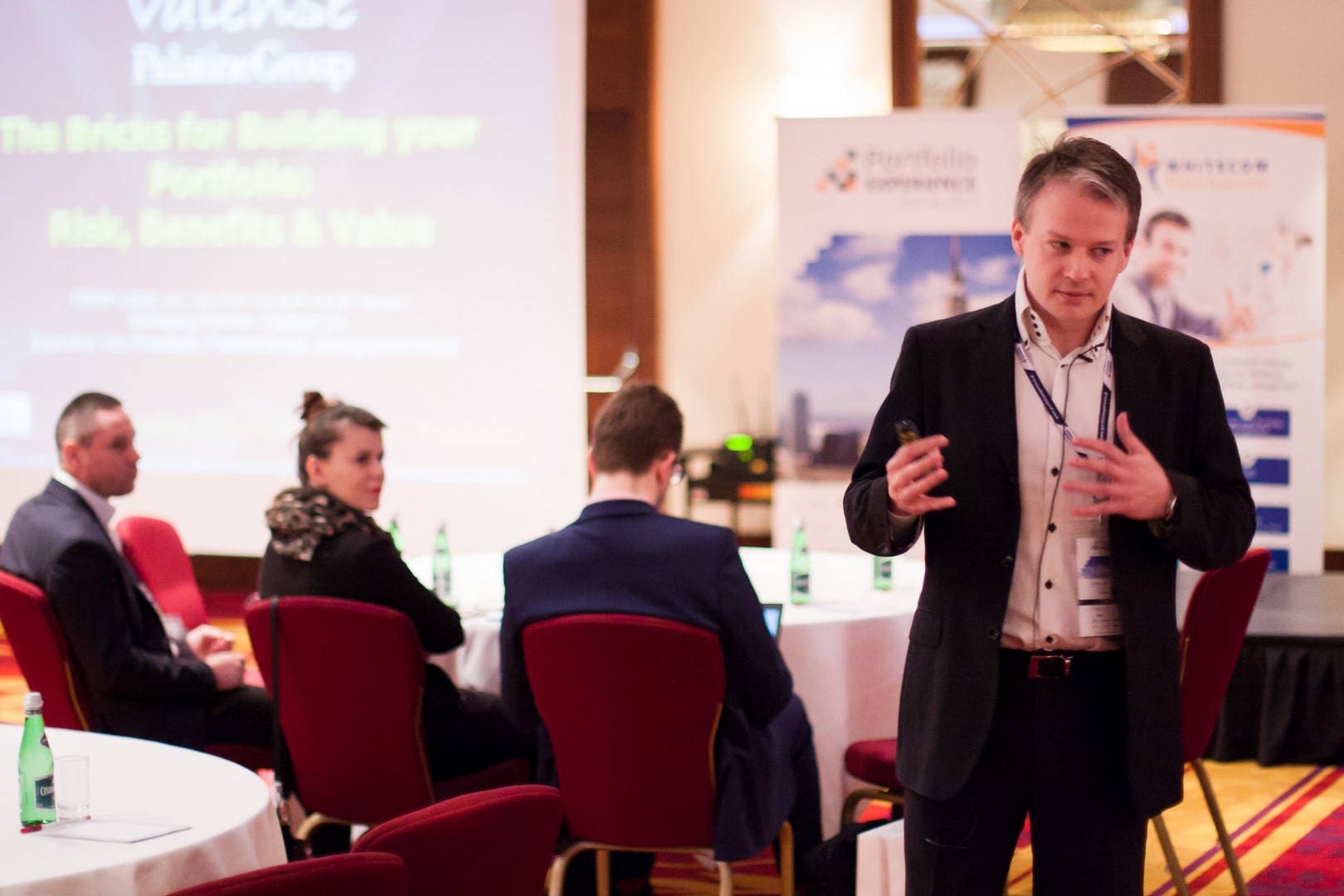 The first day consisted of several speeches by personages known in the circles of project management. The participants had possibility to listen to speakers from Poland and from overseas. Among them appeared inter alia Olivier Lazar, consultant, coach and trainer, holder of four credentials from PMI: PMP®, PMI-RMP®, PMI-ACP® and PMI-SP® and an Executive MBA in Strategy, Project and Program Management. The former President of PMI Switzerland Chapter and current member of the Chapter Members Advisory Group at PMI presented in his speech the Bricks for building your Portfolio: Risk, Benefits & Value. An important element of the presentation was explanation of strategic role of Project Portfolio Management in organization and emphasis how important is to analyse stakeholders and risks. His performance received a warm welcome from the audience. 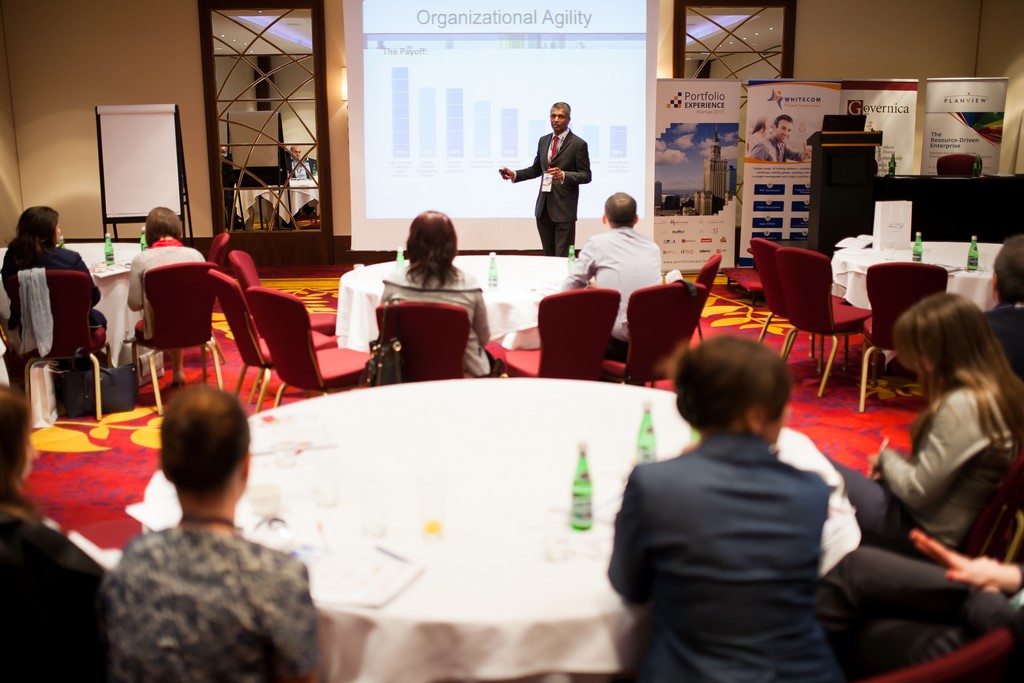 The next speaker was Yohan Abrahams, the President of the PMI UK, who can boast about an extensive experience in Project Management, inter alia as leader in creating an Enterprise Portfolio Office for the National Policing Improvement Agency. His presentation concerned development of a project portfolio using agile methods. In a later session, Agile Project Management brought nearer also Kris Jennes, former Vice-President of the PMI Belgium Chapter.

The conference was divided into two presentation panels, from which the participants could choose topics that are interesting to them. Simultaneously to Yohan Abrahams, his speech gave Witold Hendrysiak, co-founder and former President of Polish PMI Warsaw, who is responsible for Project Portfolio Management in Raiffeisen Bank Polska S.A. since 2007. At the Conference, he presented a case of PMO during transformation. He emphasized that continuous adapting to changing needs of organization was the key task of PMO.

The agenda was full of case studies and current topics about Project Portfolio Management. Participants could spread their knowledge about business value of PMO listening speech by Mario Špundak from Croatia. They had also opportunity to learn about professional tools supporting Project Portfolio Management which were introduced by Alexander Wimmer from Planview. During round table sessions, lively discussed in groups were current issues such as PMO Manifesto presented by Maciej Bodych or PPM system with Kanban introduced by Jerzy Stawicki. Participants could also train their soft skills with Małgorzata Kusyk, the current President of PMI Poland Chapter, who provided a session about collaboration in PMO. Listeners reacted actively to tasks from moderator and shared their knowledge and experiences from their branches and companies. Exchange of views was often continued in lobby. During coffee breaks participants were exchanging contacts and commenting speeches. 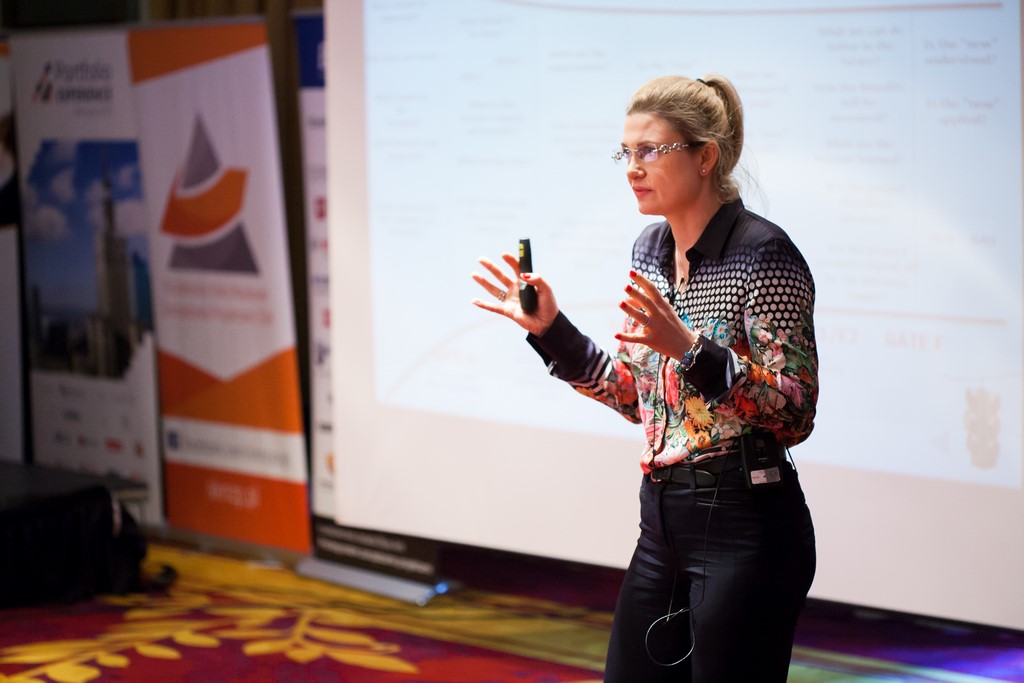 The presentation by Karolina Mitraszewska from Provident Polska S.A. was considered as one of the most inspiring lectures. The winner of the last-year edition of PMO Award presented the way of her PMO to become the Most Mature PMO of the Year 2013. The speech was a motivation for many PMO managers which showed them how well prepared processes in PMO could give profits for organization even without using professional tools.

PMO Award is a competition for Polish PMOs independently of branch and scale of a unit. Competitors answer questions about PMO, its history and plans for the future. Answers are impartially appraised by independent Jury and results are announced during the Conference. Traditionally, at the PMO Award Ceremony were awarded the winners in categories The Fastest Growing PMO and The Most Mature PMO. 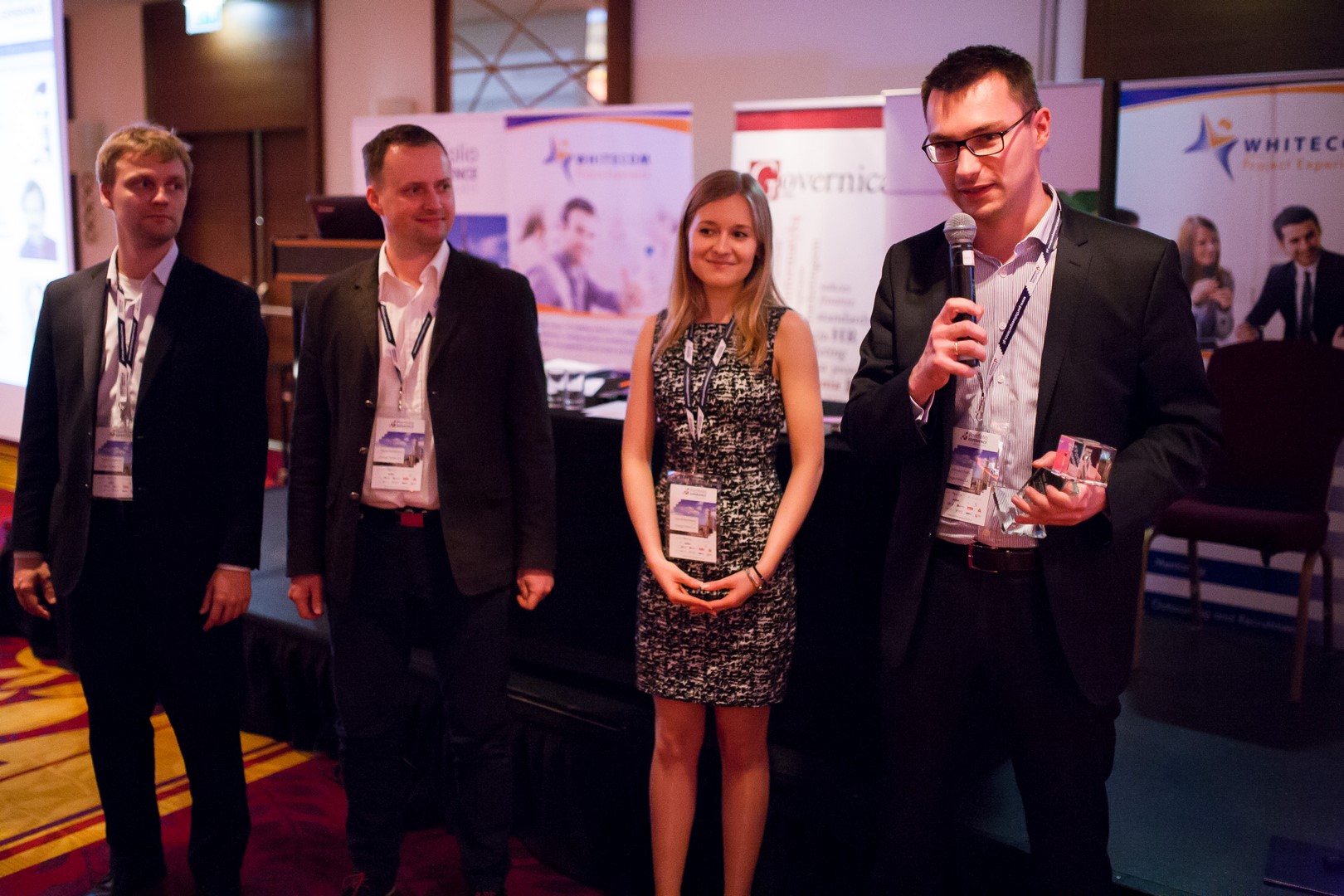 In the category The Fastest Growing PMO the Program Board decided to reward Orange Polska S.A. The PMO which in the current form has come into beginning in year 2013 as a result of transformation and merger of different services and teams. The main goal of setting up the PMO in the new structure was a need to optimize management and business processes. It is a distinct unit that in 1,5 year introduced or modified all basic services from project register through portfolio management to automation of processes in IT tools. The Program Board paid special attention to iterative approach to implementation of services and continuous adaptation to business needs which are defined by Key Performance Indicators. The PMO used also the Early Warning System, an approach that supports monitoring of project risks. A the Ceremony, Orange Polska was represented by a huge group and the prize was handed over to their leader, Mariusz Chudy, Director of Client’s Projects and Integrated Services Department. 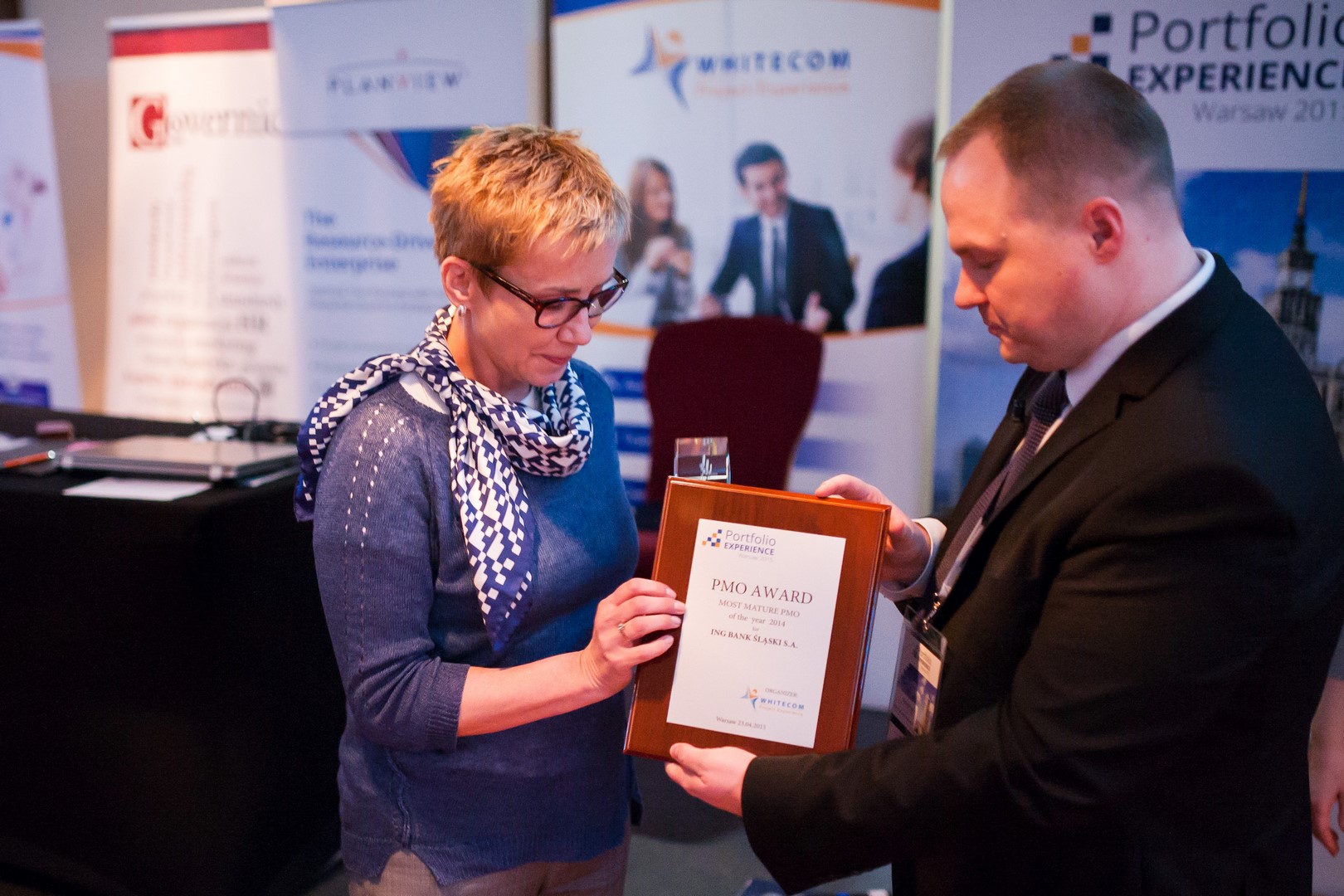 The Most Mature PMO became ING Bank Śląski S.A. represented by Małgorzata Korytowska, Head of Project Management Department. The PMO has one of the longest experience in the Polish market. The PMO was set up in the year 2006 and passed through the whole path from a small team to the Project Management Department that works for management board. The Program Board paid special attention to continuous improvement and yearly promotion and implementation of next services by PMO. The department carries out the wide range of services from supporting the organisation in strategy to project lessons learned. It introduced also many programs to build a social network and project culture. The PMO begun to act as mentor not only for the Polish company division but also for other PMOs in the international group. 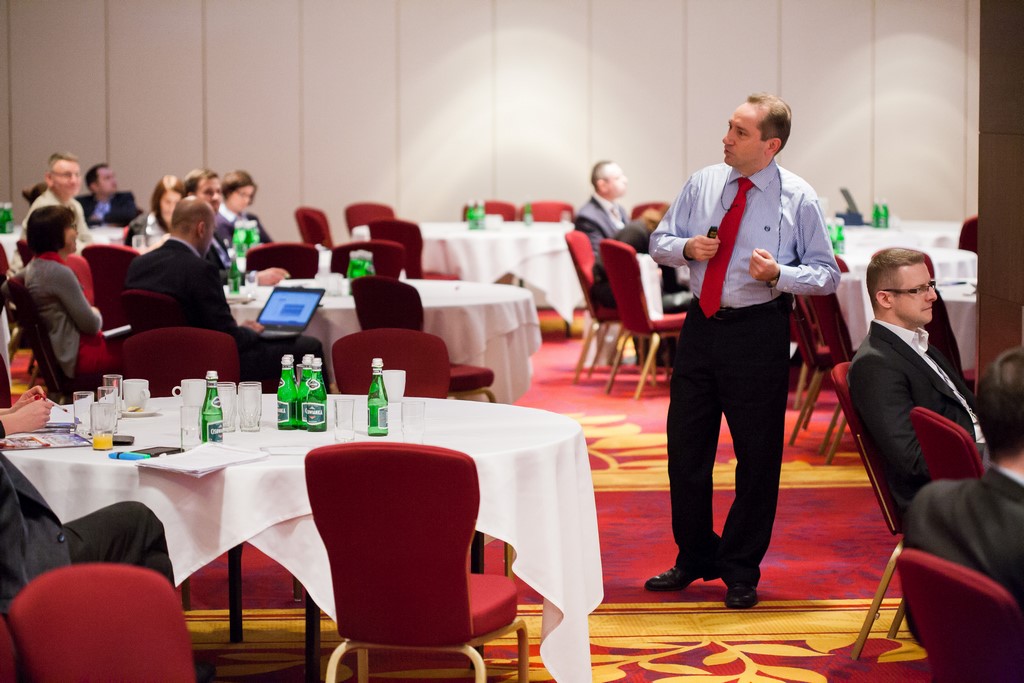 The series of lectures crowned an inspiring performance by Zbigniew Traczyk. The former PMI Secretary urged listeners to dare to dream about an ideal PMO and to pursue to achieve those ambitions. He mentioned also the problem of different names of PMOs in different units as well as communication difficulties connected to this and he suggested to standardize language in contacts to decision-makers.

The second day of Conference had a form of workshop led by Olivier Lazar. During the course participants had an opportunity to understand roles and duties in PMO, to specify target profits from PMO and to get information about required skills and competencies of each role. The main aspect was to acquaint with PMO life cycle and management of the path between stages. According to the workshop topic ‘Ensure the Sustainability of your PMO: Make it Temporary!’, trainees left the workshop room with awareness of changing nature of PMO. 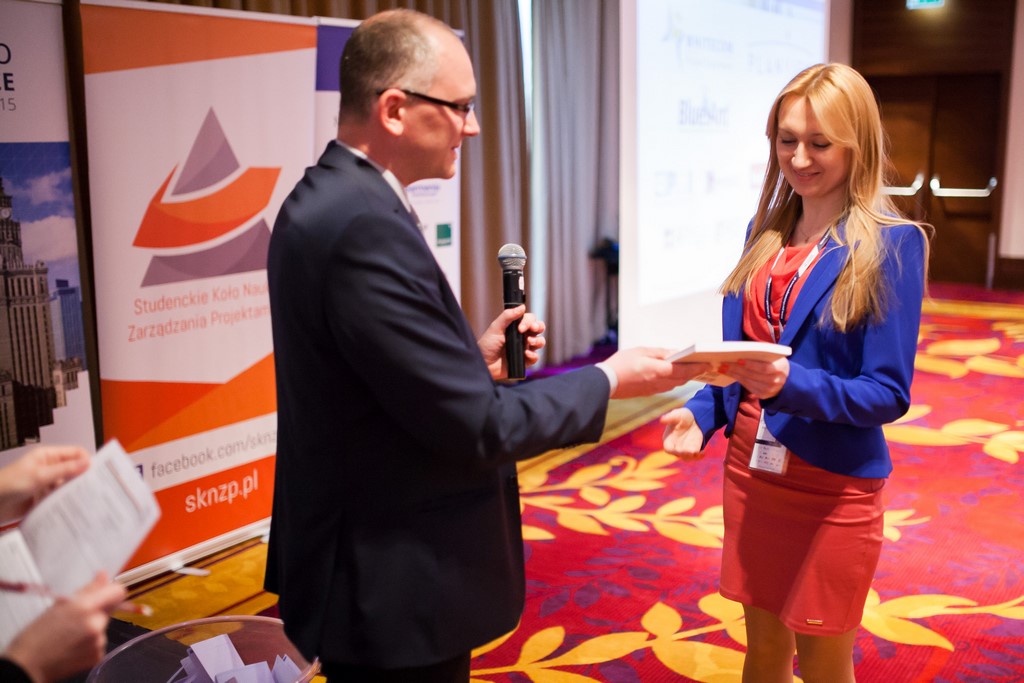 The first day ended with prize draw that couldn't be possible without our sponsors. Here we would like to thank them: Planview, BlueAnt, and Gower Publishing, as well as our partners: PMI Poland Chapter, Governika, Helion, SKNZP SGH, 4PM.pl, Magazyn Zarządzanie Projektami, ITwiz, and Interia, for the support in organizing the Conference.